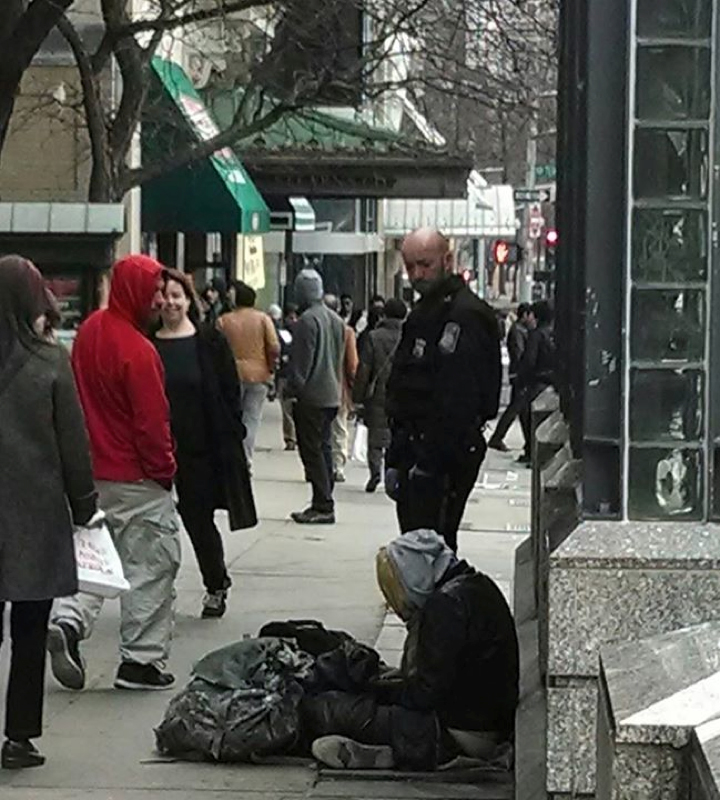 Recently on a visit to one of our security operation centers (SOCs) in Boston, I had an occasion to stop and reflect. I was overcome with feelings of connectedness, gratitude, sadness, and optimism at once.

Recent census numbers from my home city, Cleveland, represented a sad and real truth: 54 percent of all Cleveland school children live in poverty, a marked second place in the nation. Cleveland comes up high in many lists these days, and there is much excitement regarding its renaissance, reinvention, 2016 RNC convention, and various major sports team attention. I am really proud of that. However, this particular poverty statistic and standing causes me to become more connected to my Community and to continue to take action.

“In Louisville, at the corner of Fourth and Walnut, in the center of the shopping district, I was suddenly overwhelmed with the realization that I loved all those people , that they were mine and I theirs, that we could not be alien to one another even though we were total strangers. It was like waking from a dream of separateness, of spurious self-isolation in a special world, the world of renunciation and supposed holiness. … This sense of liberation from an illusory difference was such a relief and such a joy to me that I almost laughed out loud. … I have the immense joy of being man, a member of a race in which God Himself became incarnate. As if the sorrows and stupidities of the human condition could overwhelm me, now I realize what we all are. And if only everybody could realize this! But it cannot be explained. There is no way of telling people that they are all walking around shining like the sun.”

Merton, like I, often experienced the terrific realization that comes simply from being a human and from being united with, not separated from, ALL others especially those who seemingly have or hold less in common with us or who do not agree or stand with us. Added Merton: “Then it was as if I suddenly saw the secret beauty of their hearts, the depths of their hearts, where neither sin nor desire nor self-knowledge can reach, the core of their reality, the person that each one is in God’s eyes. If only they could all see themselves as they really are. If only we could see each other that way all the time.”

I am always reminded that there is so much I can do in order to be there for others in the place where they stand or sit. Those in need such as the homeless, are indeed my brothers and sisters, and I can surely feed them and serve them in many ways. We all can. We can all volunteer at breadlines and shower programs, teach life skills and tutor, serve at hospices for the dying poor and donate monies and time to food banks, detox, and mental health centers and groups and donate clothes for example.

This year I have chosen to support the United Way in its campaign. The United Way service is a strong commitment personally and professionally by my company and me to participate in adding building blocks to an improved community and quality of life. Education, income, and health are the building blocks it focuses on, and the Cleveland Schools will be better for it while poverty can be addressed and its impact reduced over time.

I have and continued to connect to our community in many ways. I would not encourage or ask others to do things I have not done myself or in which I have not included my family, friends, and business. The rewards and payback are amazing. We can write about our experiences and encourage others to do the same. Here is a recent piece I wrote for CBC Magazine.

Take the risk to speak of the value of being connected to others. Answer the call to connect and thrive. Live in a mindset of prosperity for all. Business can help drive America.

During the 1990s I volunteered for five consecutive years at the bread line at St. Malachi’s in Cleveland. I spent practically every Wednesday from noon to 3 p.m. there, even sleeping one Saturday night each month at the hospice to relieve caregivers. I learned many life lessons while serving there, most of which were taught by Father Paul Hritz. I was honored and privileged in that time to have served under his guidance in the bread line, at the Monday night meal, the clothing center, the shower program for the homeless, the detox center, and Malachi House.

”The persons we serve at Malachi House are not patients, they are residents,” Father Hritz would say. This helped remind and affirm to me the idea to know whom you serve in life, to hold dignity and respect high for all. Yet another big one was, “You are not serving and feeding, you are being fed. You are being served.” These were such life-giving experiences that gave my life meaning. It is impactful in an amazing way to be empowered to serve in a very particular way and to live it out.

Merton wrote, “Our job is to love others without stopping to inquire whether or not they are worthy. That is not our business and, in fact, it is nobody’s business. What we are asked to do is to love, and this love itself will render both ourselves and our neighbors worthy if anything can.”