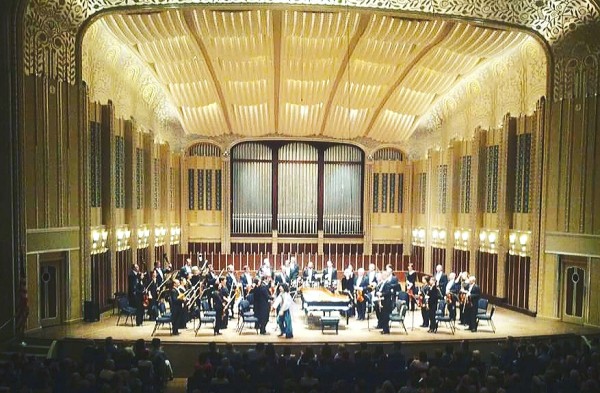 Over the last few years, the Cleveland Museum of Art, the Cleveland Cultural Gardens, Cleveland Metroparks and Cleveland Play House have all celebrated their centennials.  One hundred years ago the people of Cleveland seeded cultural and educational institutions that remain as assets that continue to improve the quality of life of our region and the world. Business leaders in our community have long recognized the impact these institutions have on the local economy, making Cleveland a better place for their employees to live, work, and play.  The region in many ways is celebrating more of a maturation and coming of age than it is a renaissance. Much of this is due to the DNA that formed our region and grows deeper as a result of our part in the industrial age and USA immigration story.

And now the Cleveland Orchestra celebrates its 100th Season Launch.  This institution continues to bring the best in classical music to its audiences in Cleveland and around the world  through concert performances, community presentations, touring residencies, broadcasts and recordings. Countless praise comes from all over.  The Orchestra has a rich history of having some of the finest musicians and conductors in its past and going forward.

“Looking toward The Cleveland Orchestra’s future, I am filled with enormous pride in the one hundred year collaboration between the Orchestra and community,” said Music Director Franz Welser-Möst.  “The exceptional musicianship and dedication of this Orchestra are acclaimed anew with each passing season, here at home and around the world.  Our audiences’ musical curiosity and intellect drives all of us onstage forward, to dream beyond the past, and to continue exploring new boundaries in music.”

He continued, “Our 100th season serves as an historic moment, not only to celebrate our rich history, but to look forward to everything this institution will accomplish in the century to come.  Against the ever-increasing and fractious challenges of the world today, I believe that we have an obligation to harness the life-changing power of music to make the world a better place — to push the limits of our art to create thrilling adventures in music.  Music is an incredible tool for good — to inspire people, as Beethoven believed, in the ‘fight for good,’ for what is right and true.”

“The year marks an important milestone, both in celebrating the remarkable first 100 years and in launching a second century that will further build on the great legacy of the Orchestra,” said André Gremillet, Cleveland Orchestra Executive Director.  “I believe that our Second Century can be even more exhilarating than our first as we continue to elevate the extraordinary artistry of the Orchestra, develop new audiences, and deepen our relationship with our exceptional community.”

The Orchestra is strong in its  community involvement. Students are served by its ongoing education programs and future audiences are introduced to Classical music by its efforts.

For many years it seemed that Cleveland led with and pointed to its world class Orchestra . To many, it is among the best on the planet. It certainly has also been a great export and ambassador of our City as the Orchestra often travels around the globe.  The Orchestra remains a Cleveland gem. Severance Hall and its architectural elegance was recently restored and it is home to some of the world’s finest performances.

The  Cleveland Orchestra  and its rich history  have forged a century of excellence. This has helped to once again catapult Cleveland on both the national and international stage.